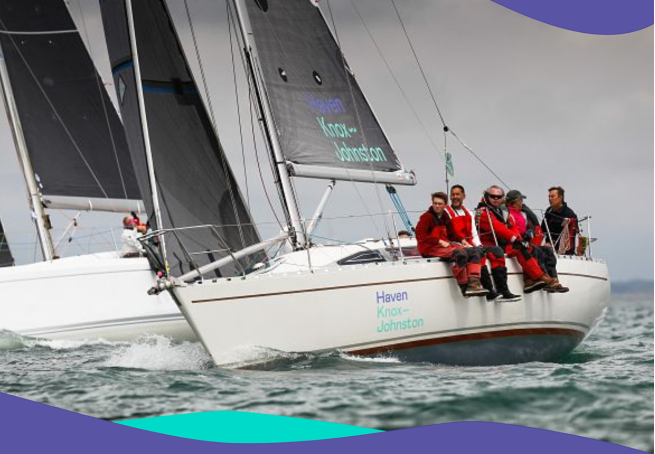 An amazing regatta!  With really close competition in IRC 3 and the beautiful venue of Dartmouth, the event proved to be a highlight of the season.

On board 'Haven K-J Enigma'

Team ‘Haven K-J Engima’ were slightly short-staffed for the first two days, with only 6 crew rather than the usual 7 or 8.  This meant that everyone had to work that much harder, with some covering two roles at times!  Racing started with a solid 15 knot breeze, and noting the less than ideal amount of weight on the rail, the number 2 genoa was selected.  After a good start, the team were in a reasonable position at the top mark.  Having rounded and set the spinnaker, the headsail was changed to the No. 1 in the dying breeze.  By this time, ‘Haven K-J Enigma’ was in a pack of boats, with other classes “getting in the way” at the leeward mark and in the subsequent legs.  By the finish, a fourth place in the 10 strong fleet was the result . . . not too bad, but improvement needed.  With the gradient NE breeze having been cancelled out by the sea breeze, racing was concluded for the day.

The second day started with a lighter, but steadier NE breeze of around 12 knots.  Three races were sailed to put the regatta back on schedule.  The second of these resulted in the closest finish of the regatta, with ‘Haven K-J Enigma’ finishing first, ‘Seajade’ (SJ320) just 3 seconds behind and ‘Frank 3’ (another SJ320) only 2 seconds further back.  Having given herself a good talking to, ‘Haven K-J Enigma’ posted a 2, 1, 2 score line for the day, putting her in second place overall behind ‘Seajade’.

With another crew member joining for the weekend (Pete), the crew took to the water on Saturday with renewed confidence.  After 2 good starts, good first beats and some good tactical decisions on subsequent legs, the team posted wins in both races, putting them in first place going into the final day.

In the penultimate race, ‘Haven K-J Enigma’ struggled for boat speed on the first leg and was well behind ‘Seajade’ by the top mark, fighting for position amount several boats in the class.  This resulted in a 5th place, which would be the team’s second discard.  A win in the final race would still secure first overall and so the team decided to stick close to ‘Seajade’ on the first beat.  After another good start, all was looking well, however ‘Seajade’ seemed to find an extra gear and led at the top mark, with ‘Haven K-J Enigma’ in hot pursuit.  However, no matter what the team did, they could not narrow the gap to ‘Seajade’ enough to beat them on corrected time.  ‘Seajade’ won by 40 seconds and in doing so, equalled ‘Haven K-J Enigma’s’ overall points for the regatta, winning on countback with the win in the final race.

Overall, an excellent regatta, where the crew dealt with a number of issues including being a crew member short for the first two days and a ripped lightweight spinnaker which could not be used on the final day.

Overall, the crew agreed that the best team had won  . . . . congratulations to ‘Seajade’!

A fantastic effort by the crew, who were:

Mark (trimmer and the voice of reason!),

Phil (mainsheet / mast / everything else not done by somebody),

Pete (mainsheet and some great tactical calls on the last two days).