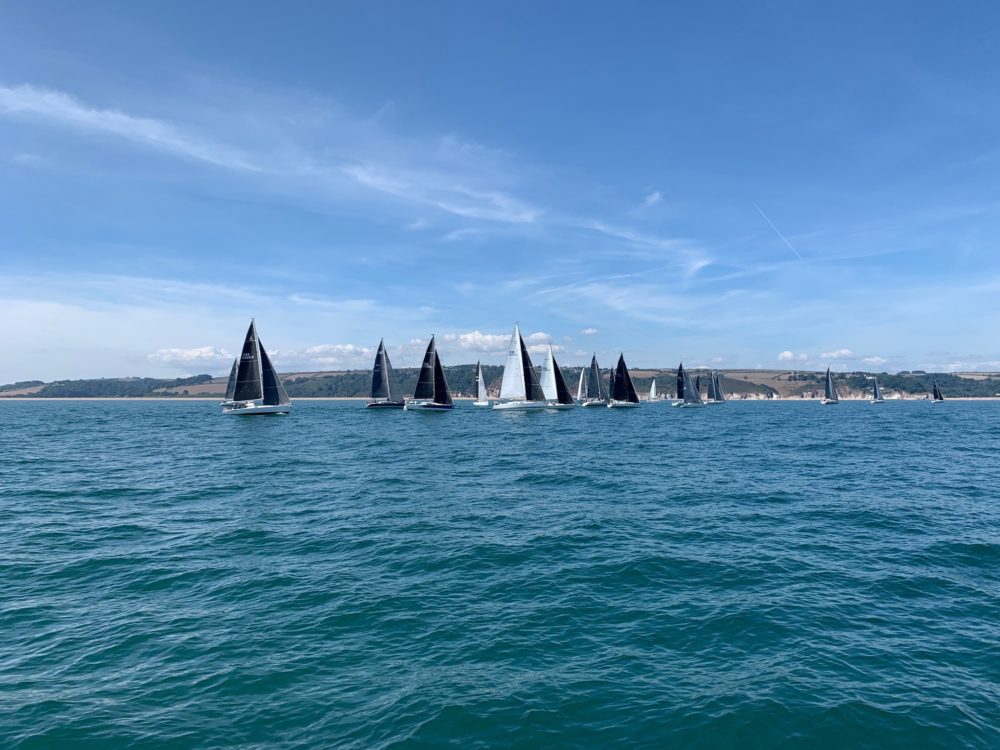 Dartmouth Regatta is the highlight of the season for the crew of ‘Haven KJ Enigma’. This year, the trip from Poole included an overnight stay in Weymouth for the delivery crew of Carrie, Ant, Mark and Ian. Of course the leg from Weymouth to Dartmouth was a beat all the way!

However, the crew arrived at around 5pm on Tuesday and used Wednesday to prepare the boat for the regatta.  This included scrubbing the hull, which Mark bravely volunteered for. Claire, Nick and Paul arrived on Wednesday to complete the crew (Rockstars?). 7 races were scheduled over the 4 days, with the Bay Race held on Friday being a tour of Start Bay around fixed marks.

As it was far longer than the others, the result from the Bay Race would be counted twice in the overall results.  ‘Haven KJ Enigma’ completed in IRC Class 3, which included a group of highly competitive yachts, with very similar ratings. These included an SJ320 ‘Frank 3’, an X99 ‘Reefer X’, an Elan 333 ‘Finale’, Sigma 33 ‘Prospero of Hamble’, Sigma 38 ‘Kindred Spirit’ and two J80s ‘Slightly Steamy’ and ‘Jackaroo’.

On board 'Haven KJ Enigma'

The fleet were welcomed with sunshine and a light NE breeze as they motored out to the start on the Outer Course on Thursday. With the wind hovering at around 6 knots, the Haven KJ team knew racing would be a challenge. After a good start, it became apparent that some of the lighter boats were quicker in the very light wind, in particular, ‘Slightly Steamy’ which pulled away from the fleet as the race progressed. ‘Haven KJ Enigma’ posted a 4th place, which although not great, was not a disaster.  In race 2, the team managed to squeeze a little more upwind speed, with careful trim and halyard tension adjustment.  However, ‘Slightly Steamy’ was away again and finished over two minutes ahead of ‘Haven KJ Enigma’, which in turn was 5 minutes ahead of the next yacht.  So at the end of day one, the team were in second place with 6 points, with ‘Slightly Steamy’ in first with only 2 points. With crewmate Ant’s social media skills (surely he’s too old!) having secured some lovely Salcombe Gin delivered to the boat on the way back to Dartmouth, the team were in good spirits!

The Bay Race was run on Day two and the teams looked forward to a longer distant race around Start Bay, however, the wind was again light and this time from the West. The course set by the race officer was therefore fairly short, but with plenty of corners to test crew’s boat handling skills.  ‘Haven KJ Enigma’ had an excellent start and led up the first beat, with the ‘Frank 3’ and ‘Reefer X’ in close pursuit.

It wasn’t until the top of the last beat that ‘Frank 3’ managed to hook into a big lift and rounded in first in a dying breeze. The last leg was a spinnaker run to the finish south of Blackpool Sands. ‘Frank 3’ managed to pull away to take the win, with ‘Haven KJ Enigma’ in second and ‘Finale’ coming through to 3rd as the wind filled in from astern. At the end of day two, ‘Frank 3’ and ‘Haven KJ Enigma’ were both on 10 points, with ‘Frank 3’s’ two first places putting them in in the lead.

Day three saw the wind back in the NE and again fairly light at between 6 and 8 knots.  ‘Haven KJ Enigma’ managed a perfect port-tack –flyer at the pin end of the line and crossed the fleet. However, in the light winds ‘Reefer X’ had better upwind speed and was soon out in the lead. At the finish, it was a clear win for ‘Reefer X’, with ‘Haven KJ Enigma’ in second and ‘Frank 3’ in third.

The second race started in even less wind, which swung around to the SW before any boats had managed to cross the start line, with crews scrabbling to hoist spinnakers. The Race Office wisely abandoned the race and after a wait for wind which did not materialise, racing was abandoned for the day.

After the discard had been applied to the results, again ‘Haven KJ Enigma’ and ‘Frank 3’ were both on 10 points, with ‘Frank 3’s’ two 1st places putting them in the lead. All to play for on the final day!

The wind was much firmer on the final day, with between 12 and 16 knots from the East. In the first race ‘Haven KJ Enigma’ made an excellent start towards the pin and led up the first beat, keeping a close eye on ‘Frank 3’. However, it was ‘Reefer X’ which pushed hardest.  By the finish, ‘Reefer X’ was only 14 seconds behind, with ‘Frank 3’ in third. After some quick calculations, it was clear that beating ‘Frank 3’ in the final race was needed to secure the overall win. ‘Haven KJ Enigma’ tried to start close to ‘Frank 3’, however other boats “got in the way”, resulting in having to tack to port and effectively start last. Some ground was made up the first beat, resulting in ‘Haven KJ Enigma’ tacking under ‘Frank 3’ on the lay-line for the mark, with ‘Reefer X’ just a few metres behind.  ‘Frank 3’ pulled away on the two reaches to lead at the start of the final beat. ‘Haven KJ Enigma’ held onto port while ‘Frank 3’ tacked off and when the boats next crossed, ‘Frank 3’ was just behind. At the top mark, Haven K-J’s lead had extended and this was held to the finish, with ‘Frank 3’ finishing just over a minute behind.

A fantastic effort by the crew, who were:

Ian (he’s grumpy – give him another jelly baby!) – the bloke at the back. 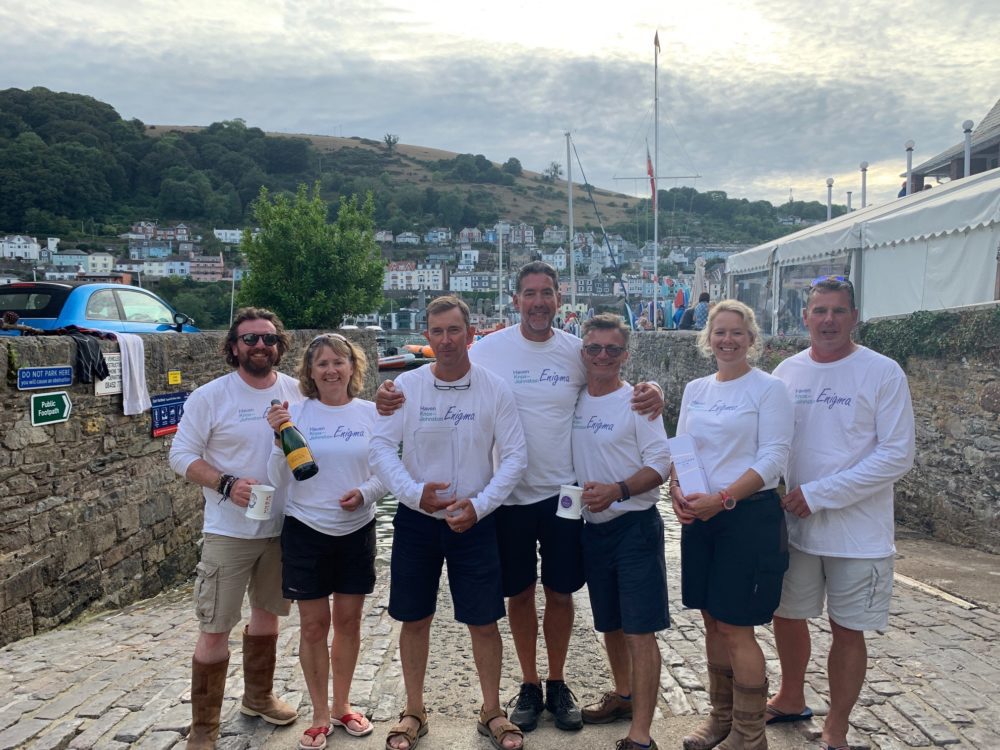 An amazing regatta!  with very close racing, great race management and the lovely Dartmouth as a base. What more could you ask for.